For recipes I've been trying lately:
https://www.pinterest.com/ironicsteph/vegan/
Posted by .IronicSteph. at 4:37 PM No comments:

These simple cookies are a huge hit with anyone. I've brought these to work, parties and many other events where everyone asks for this recipe. 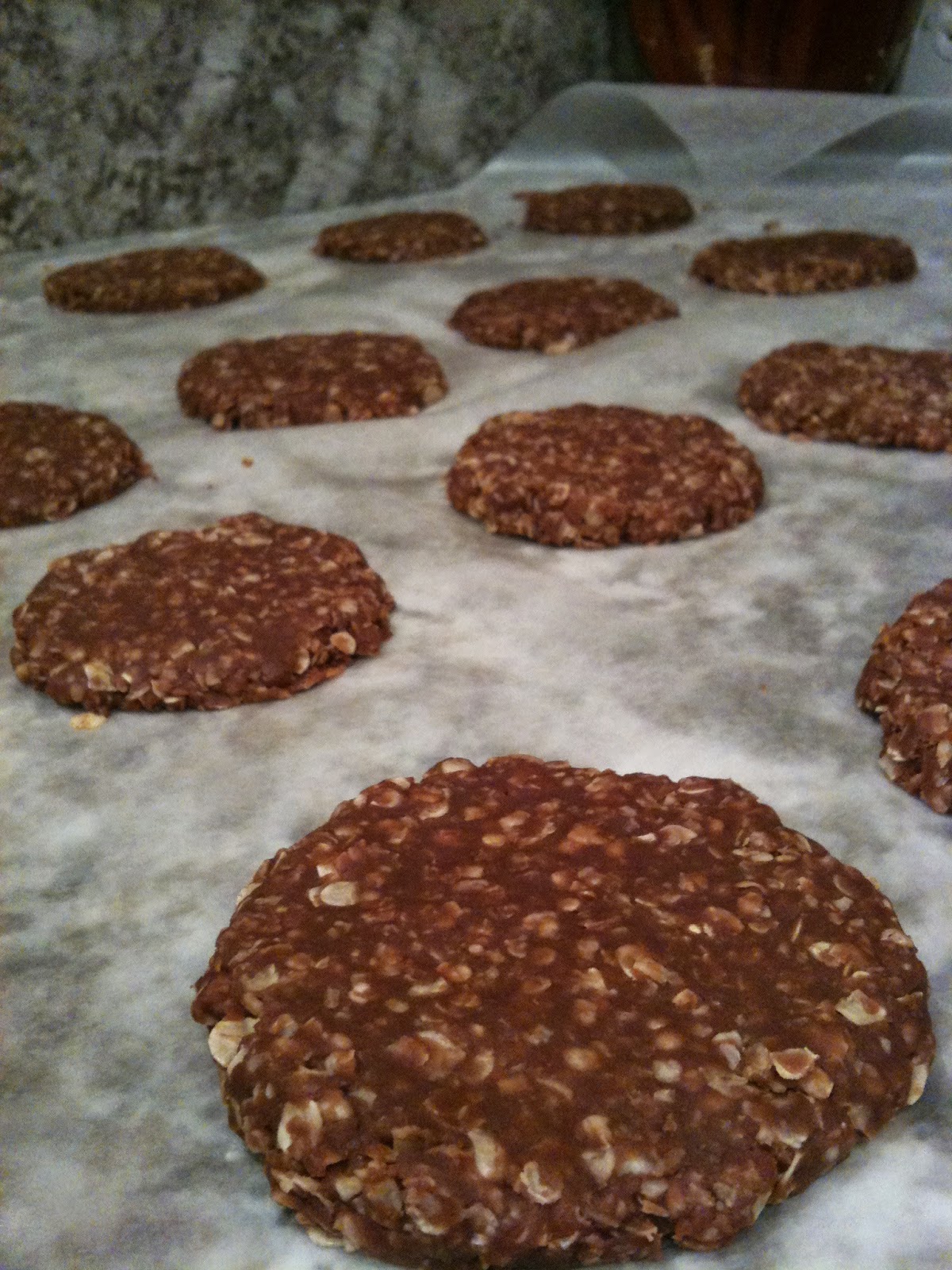 Put the dry oats in a large mixing bowl and lay out wax paper on a counter. Combine sugar, milk, butter and cocoa in a large skillet with a whisk. Bring to a boil and cook for 1 1/2 minutes. Remove from heat and stir in peanut butter and vanilla. 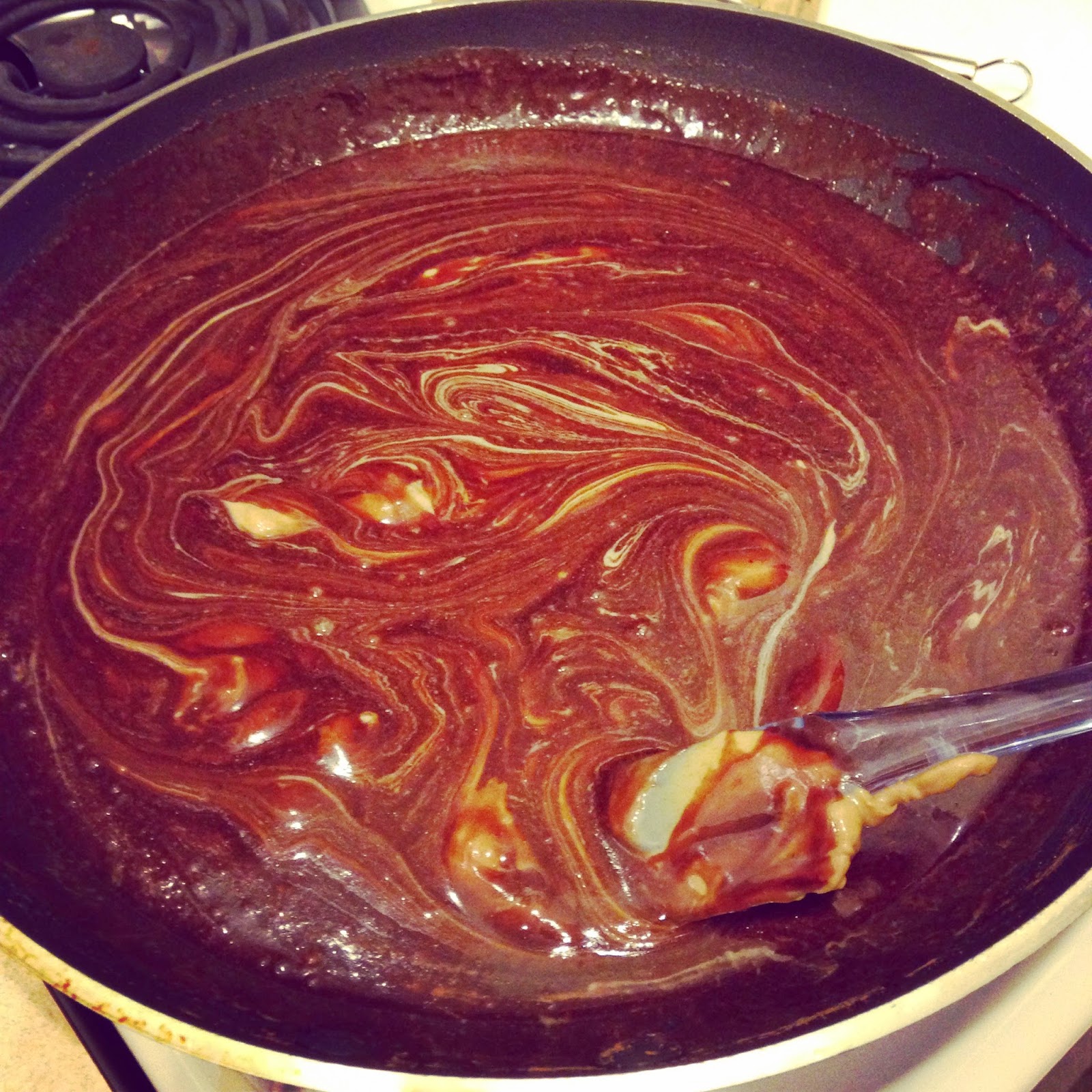 Pour over oats and mix with spatula. Spoon the batter onto the wax paper in whatever shape you desire. I typically choose pucks or balls. I also like to press chocolate chips into the cookies for an added texture. Let the cookies harden and cool before storing or presenting.

This is a great recipe for those trying to eat healthy but aren't feeling full from snacks and food limitations. This recipe really fills you up, feels great, tastes great and has many health benefits :] 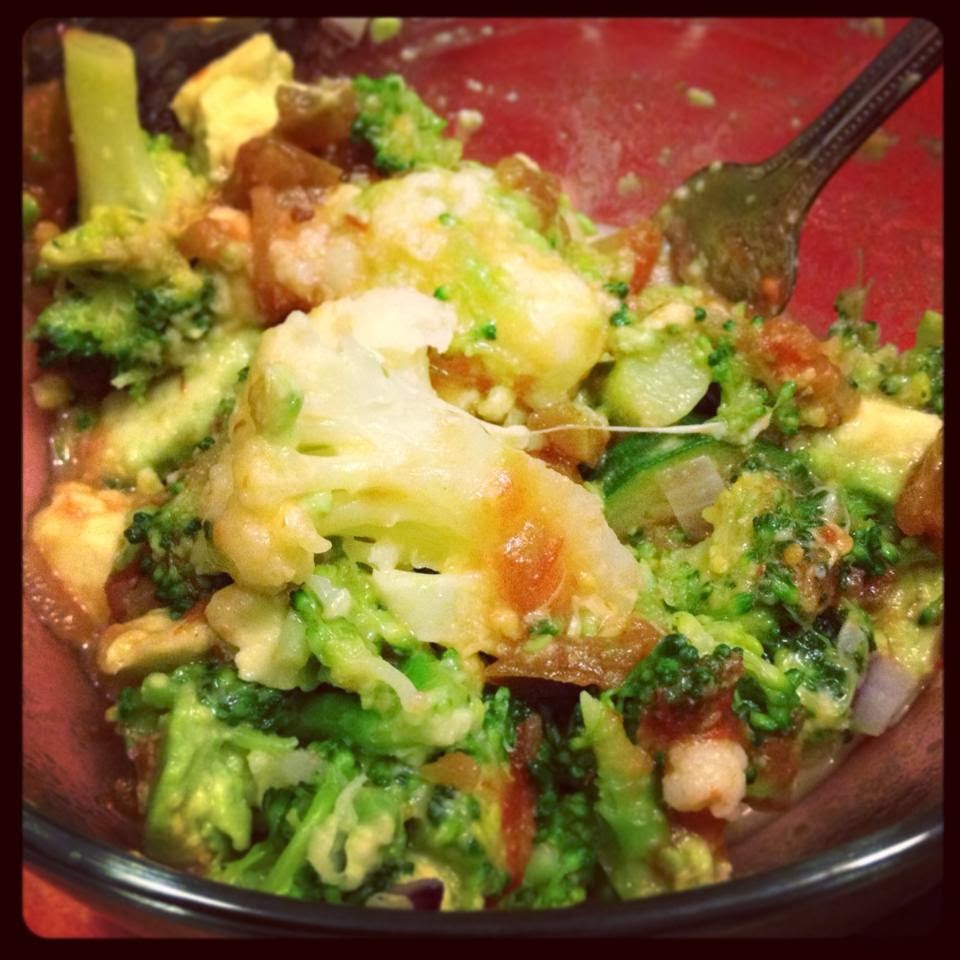 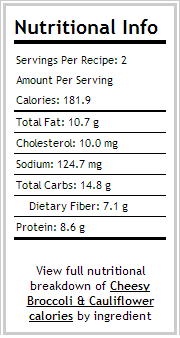 Throw the broc/caul/zucchini and a generous amount of garlic powder in a skillet with a thin layer of water at the bottom and put the lid on it while it steams for a few minutes. I had my heat on high for a little longer than 5min and they were perfect.
-once they are soft, turn off the heat and add the cheeses and red onion to the pan and mix.
-throw it into a bowl and add the sliced avocado and picante sauce.

**Today I tried a new variation, took out the zucchini and added a scrambled egg white. It tasted great and the egg white adds more protein :]** 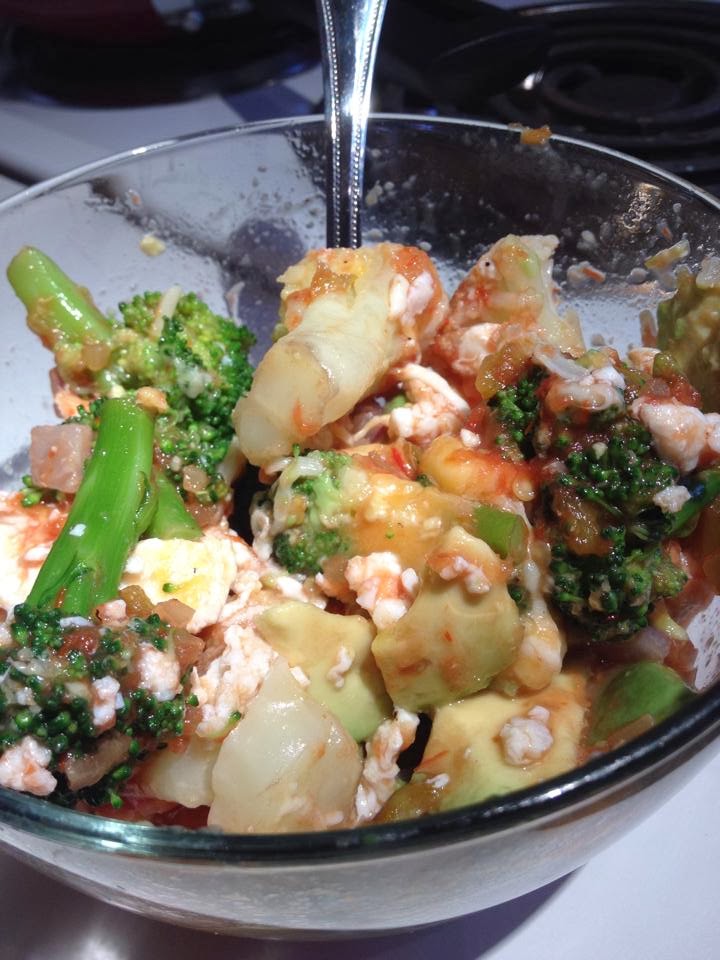 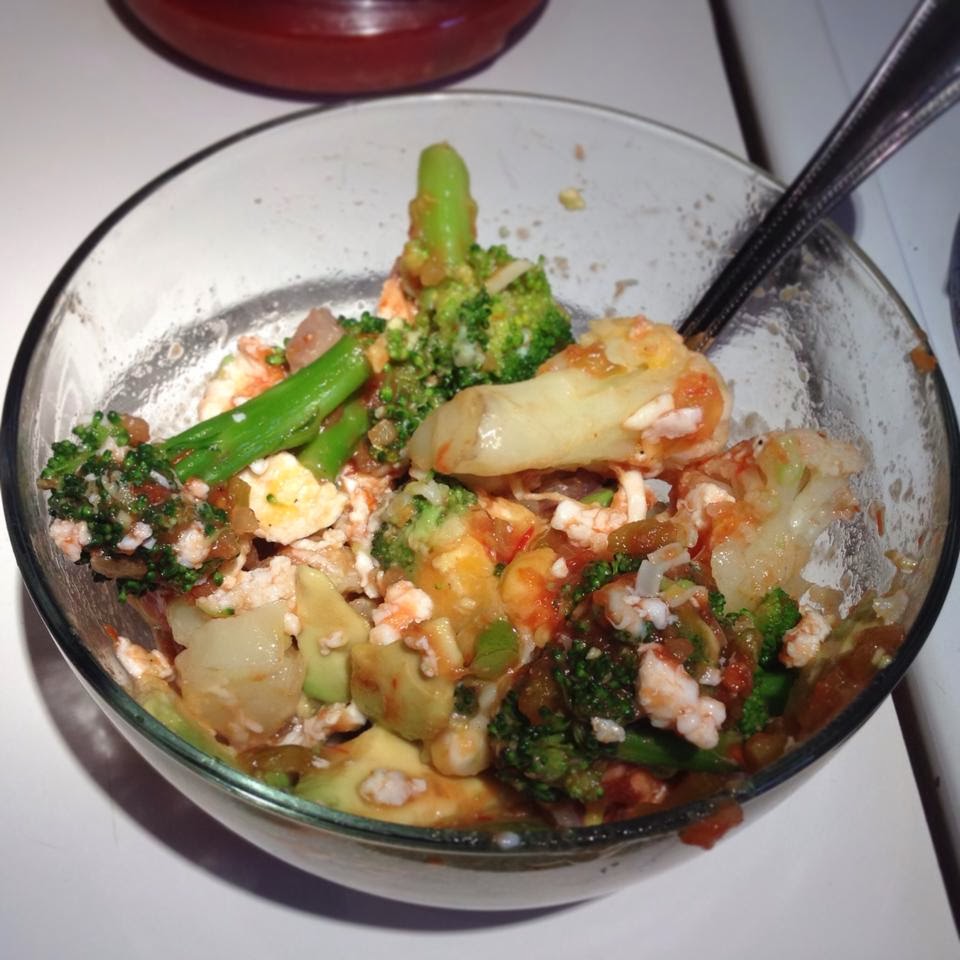 Use Sparkpeople and want to add this recipe to your nutrition tracker?

I am a barista, and I LOVE coffee. I used to have a crazy sweet drink everyday for years, but once I became dedicated to eating well I decided to experiment and find a drink that doesn't cost me much. I have always preferred iced coffee over hot coffee. I think the espresso tastes better that way. I discovered an iced soy latte with sugar free hazelnut. It's the perfect amount of sweet and creamy for me and you only have to consider the soy milk in a nutritional tracker. Espresso and SF flavors have barely anything to them when it comes to calories, carbs, fat, so soy is the only major factor :] 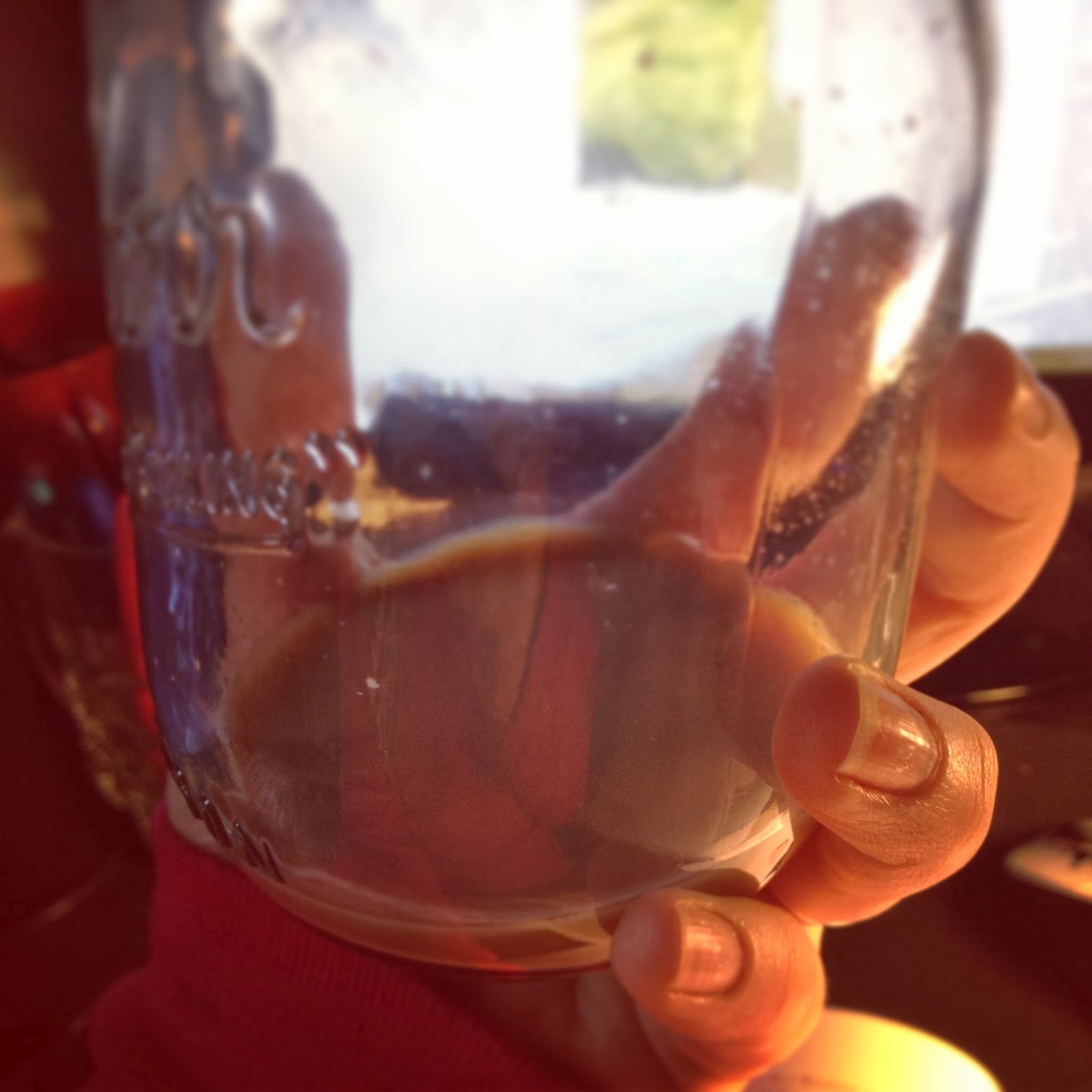 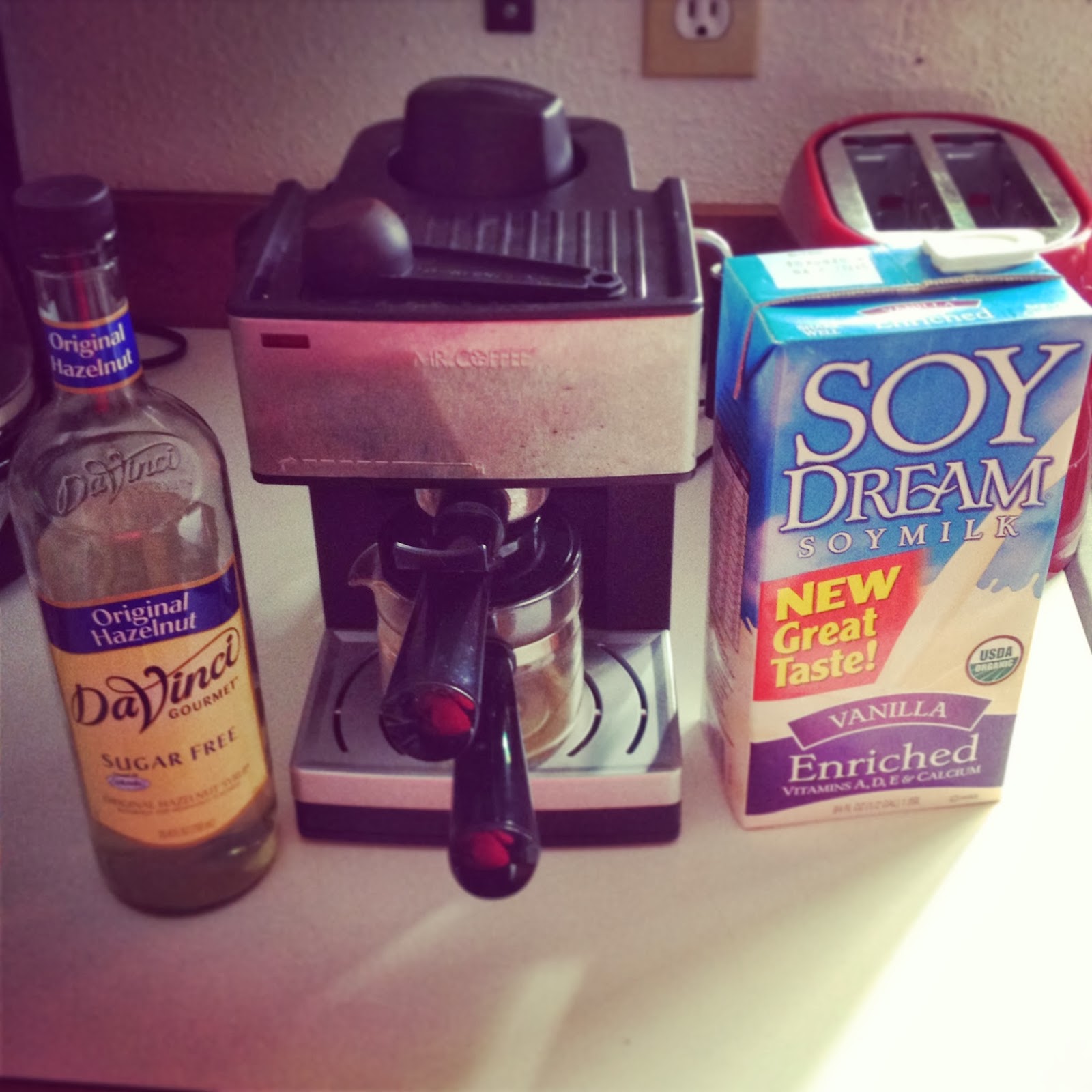 Thinking about buying a personal espresso machine? Here's mine:
http://www.amazon.com/Mr-Coffee-ECM160-Espresso-Machine/dp/B000U6BSI2

Want sugar free hazelnut syrup for less than $4 a bottle? Find your nearest Cash & Carry store. They supply small businesses with great products, including a whole isle of syrup flavors. 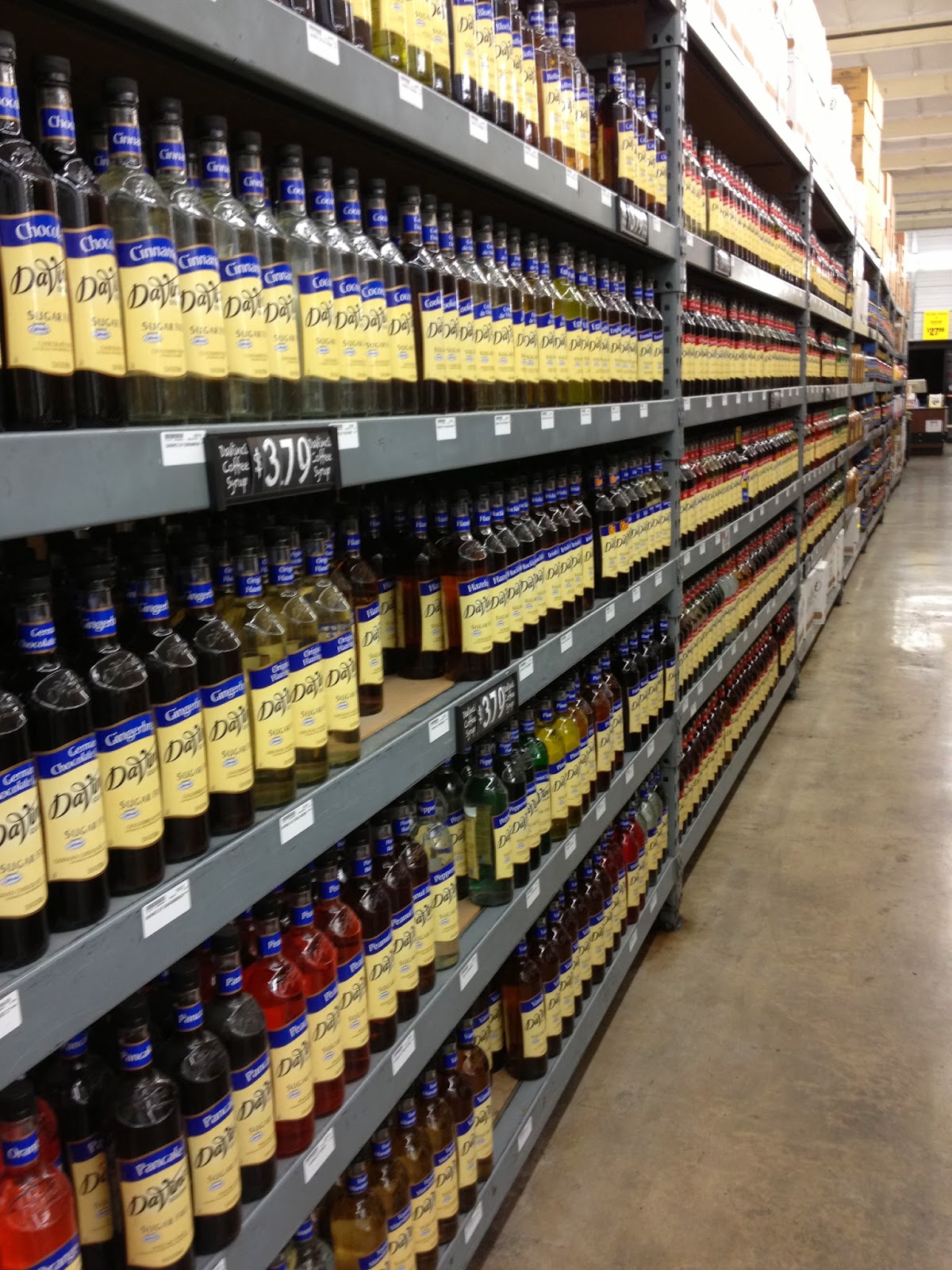 It's been a while since I have had a chance to add some great recipes. School has been incredibly intensive this quarter but I am finally back on track with eating well and working out everyday :] It feels fantastic. Tonight I tried a recipe I have attempted before and it wasn't very successful the first time, but this time it far exceeded my expectations. This creamy cauliflower sauce is hearty, a touch spicy, healthy and delicious. 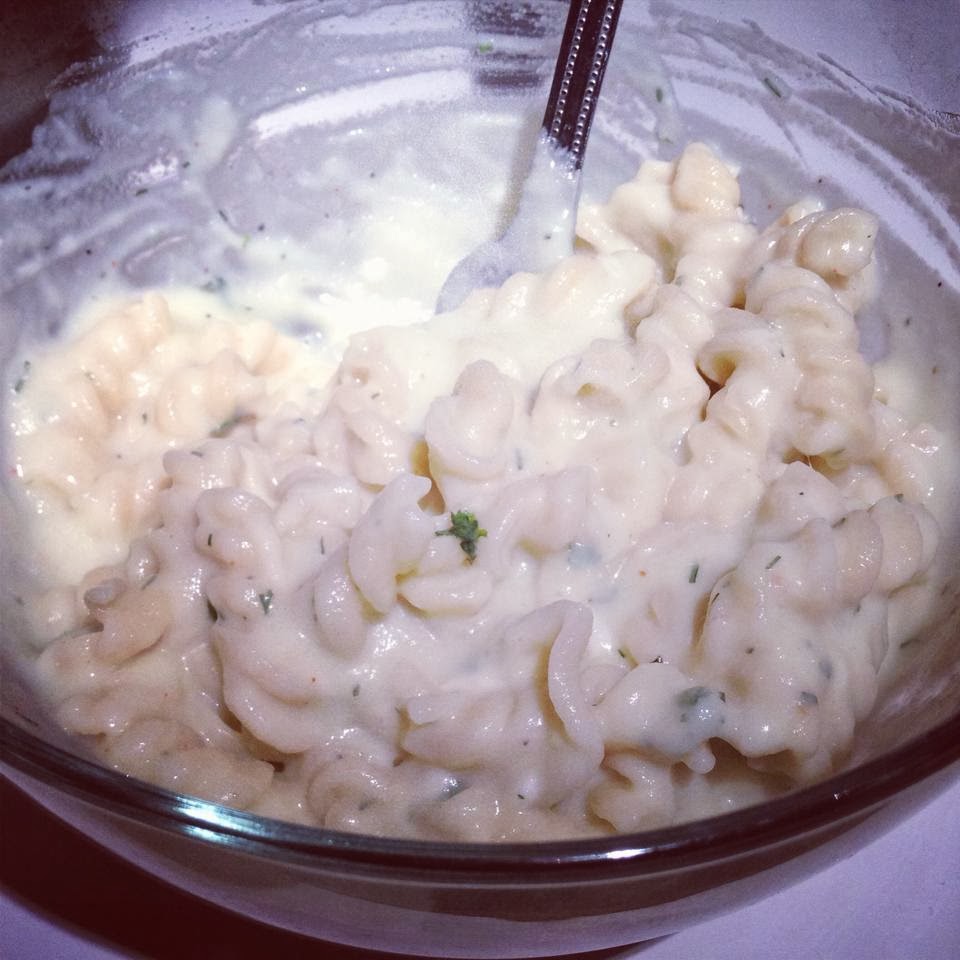 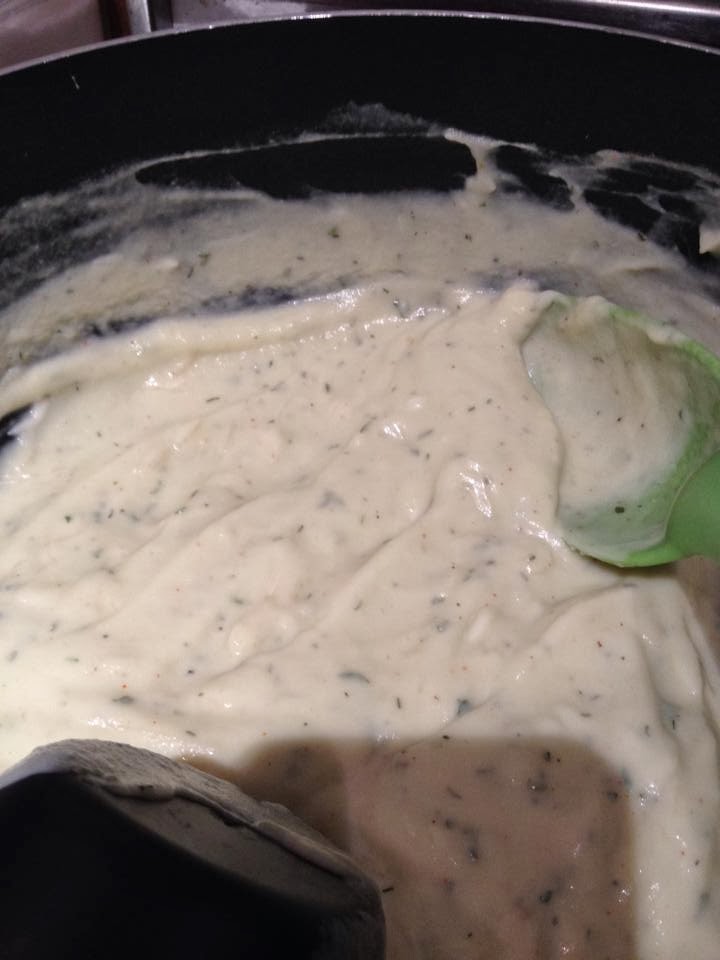 -Directions-
-In a big pot put the chicken broth and cauliflower in and bring to a boil, then let it cook and soften between 7-10 minutes.
-In a small frying pan, add the butter and minced garlic. Saute, but do not brown the garlic.
-In your blender (preferably one that can handle 6 or more cups) blend the avocado, with a sprinkling of garlic powder, until smooth.
-Once the cauliflower is fully cooked, transport it to the blender, straining away the broth, but add 1 cup of that broth to the blender and a dash of pepper.
-Puree the cauliflower and avocado until smooth, then add the buttered garlic.
-Return the sauce to a big pan and add the cheeses and ranch herbs and a touch of cayenne pepper.
-Stir until the cheese begins to get stringy.

Pair with your favorite thing to put sauce on. I chose noodles. Next time I will have it with broccoli. You could also have it on rice or quinoa.

If you are a SparkPeople user, go to this recipe to add it to your nutrition tracker :]
http://recipes.sparkpeople.com/recipe-detail.asp?recipe=2670483&ff=1

Posted by .IronicSteph. at 7:57 PM No comments:

The Green Curry Simmer Sauce makes this chicken salad a touch spicy and very delicious. Each serving has 15g of protein and tastes amazing in a pita pocket with lots of spinach. I like to bring it to work for lunch and it keeps me going quite a while! 1 Serving= 3/4 cup 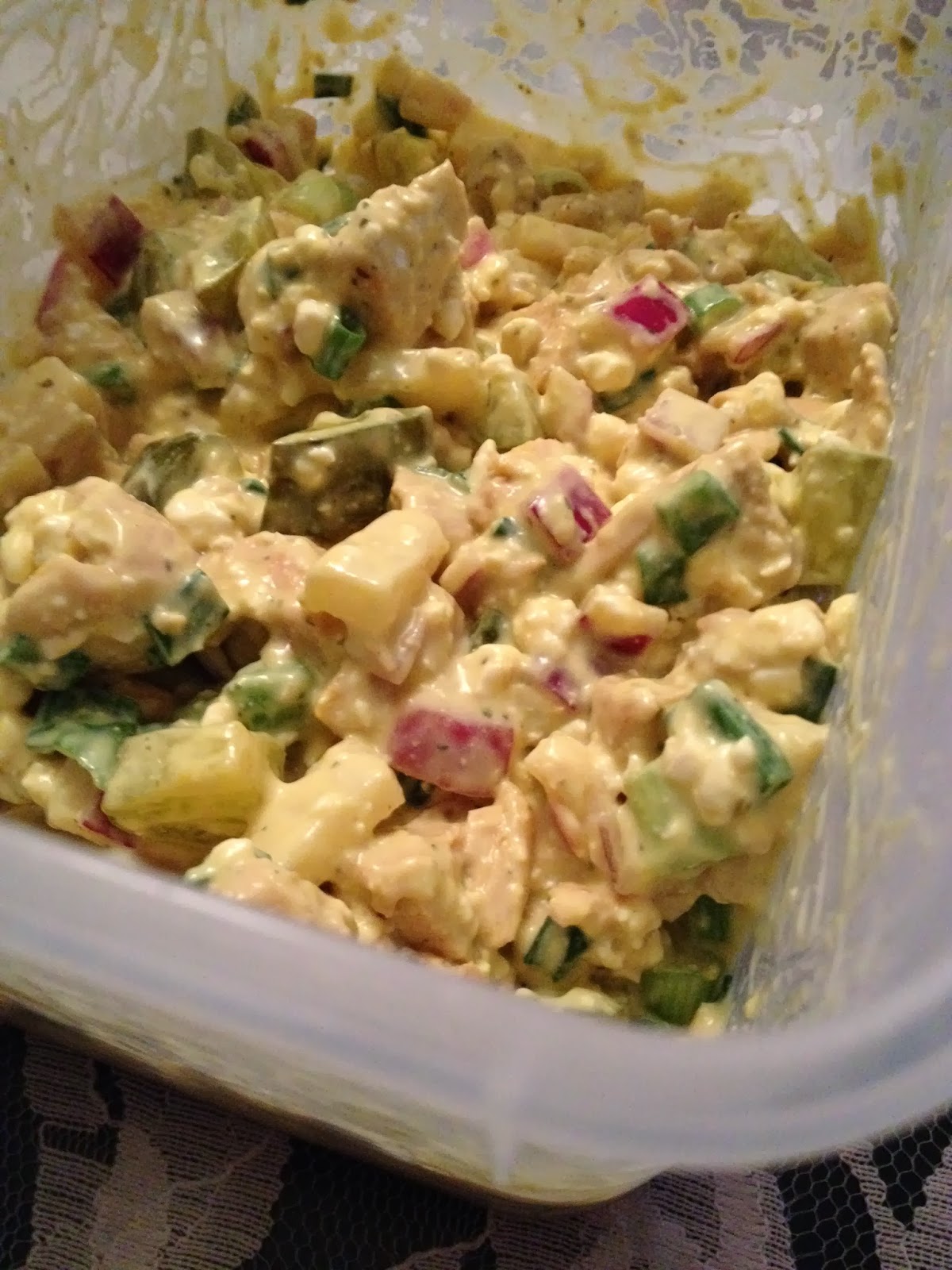 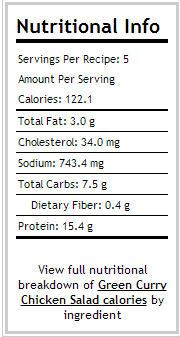 -Cook the frozen chicken breasts in a skillet and slice into small chunks. Add the simmer sauce to the fully cooked chicken and let heat up.
-Place curried chicken in the fridge to cool while prepping the veggies.
-Dice the onions, pickles and egg whites and throw into a Tupperware container.
-Mix the mayo and mustard together and add to the veggie mixture.
-Add the chicken to the mixture and stir well.
-Sprinkle with pepper. 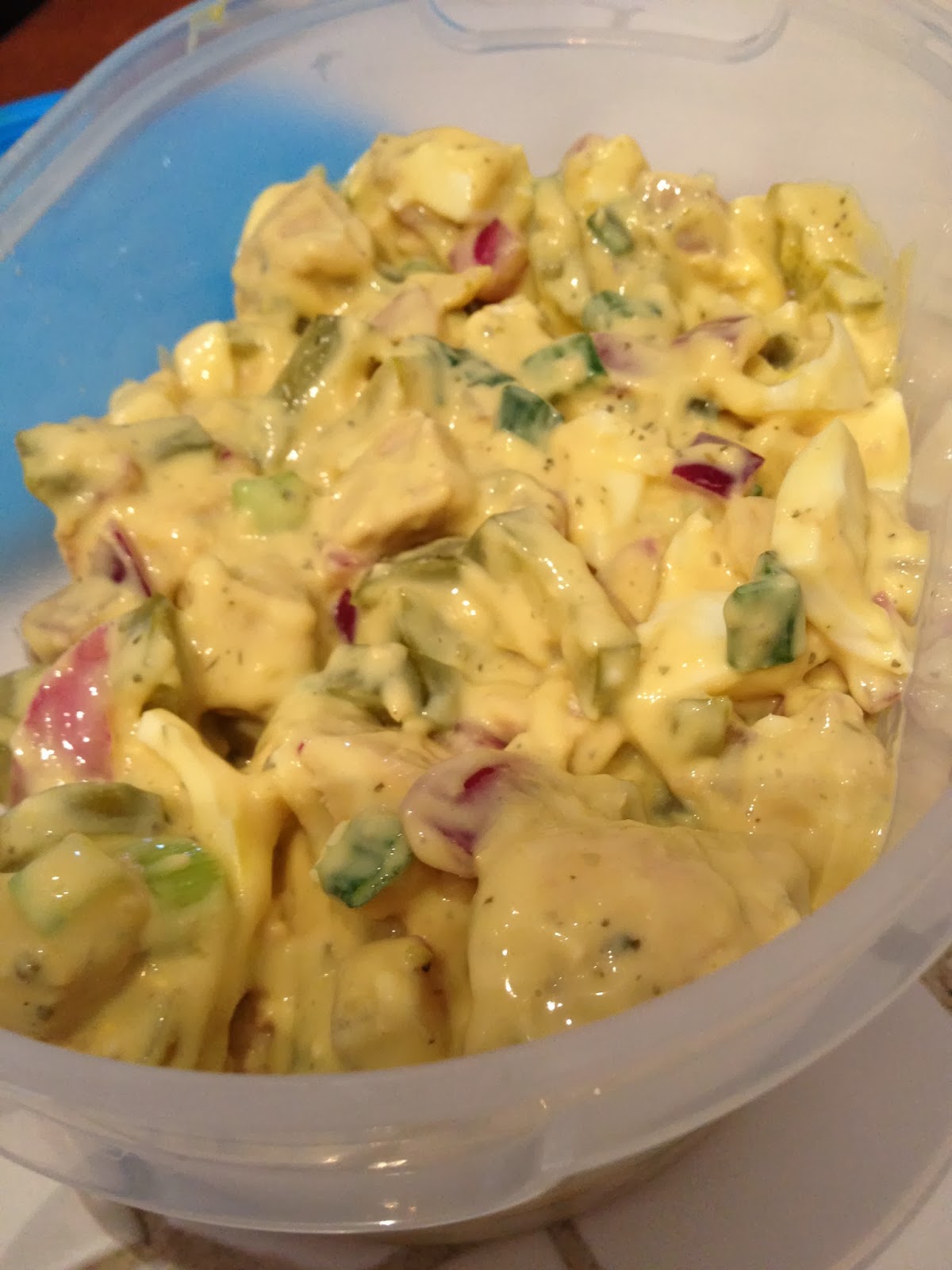 Here was my lunch today :] 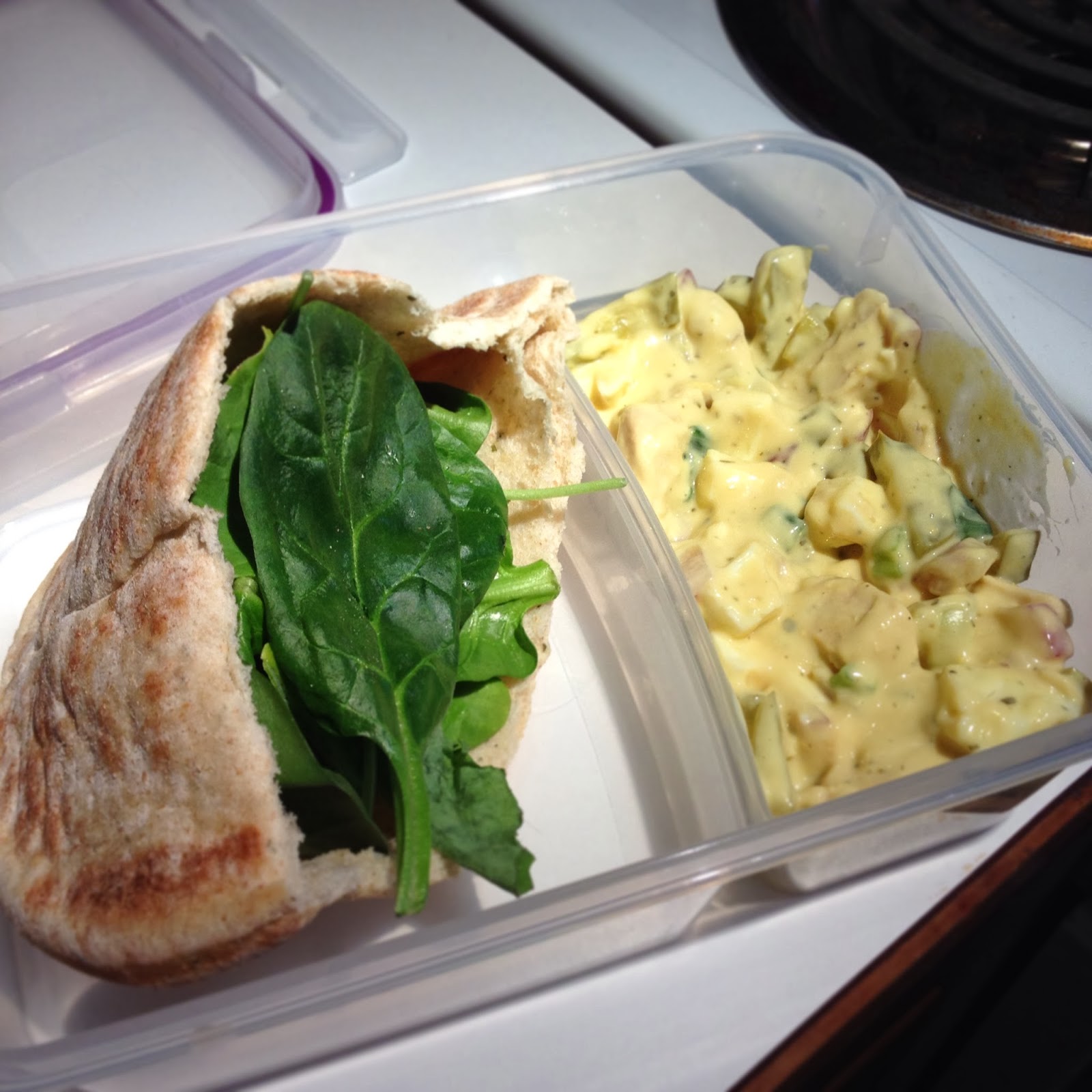 Use Sparkpeople and want to add this recipe to your nutrition tracker?
http://recipes.sparkpeople.com/recipe-detail.asp?recipe=2666963

Today I got off work and was feeling pretty hungry, but it was only 3:00pm. I decided I would have a mini meal that would last me till dinner for sure! I concocted a wonderful blend of scrambled eggs, greens and a little cheese. It was delicious! I still have onion mouth from it...haha. Yesterday I looked up what spices are the best for our bodies and discovered that Turmeric was on the list! It added a really nice flavor to the eggs and made me feel good that I was consuming a spice that helps with inflammation. 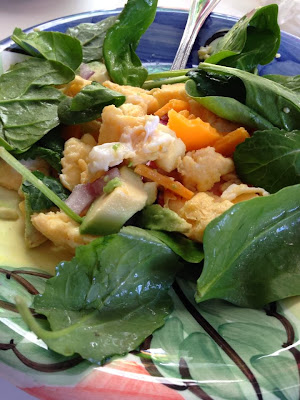 -Ingredients-
-2 large eggs
-a pinch of Turmeric (Turmeric has anti inflammatory agents in it)
-a generous shake of garlic powder
-a splash of milk (or soy, almond, coconut...etc)
-a handful of mixed greens, I used spinach and kale
-diced red onion
-a quarter of an avocado
-a half of a slice of cheese
-Directions-
-heat up a skillet on the stove.
-crack the eggs into a small mixing bowl, discarding one of the yolks.
-add the turmeric, garlic powder and milk to the egg mixture, then whisk until blended.
-scramble the eggs in the skillet.
-on a plate, throw together the diced red onion, chopped up avocado, broken apart cheese and rinsed greens mixture.
-add the scrambled eggs to the plate and there you go! A delicious blend of healthy :]

I also had a chocolate craving and decided to make my Tofu Mousse, man is it good. Hit the spot perfectly.

Posted by .IronicSteph. at 4:17 PM No comments:

Today has been one crazy productive day. On top of accomplishing a ton of things, I tried my very first recipe out of my new cookbook that I got from my grandma for my birthday :] 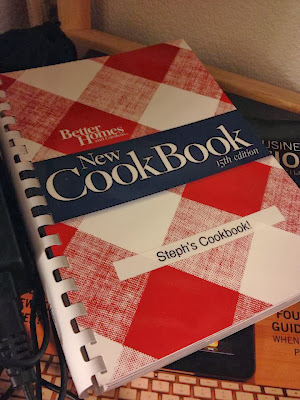 I then proceeded to label recipes I am stoked to make! ;] 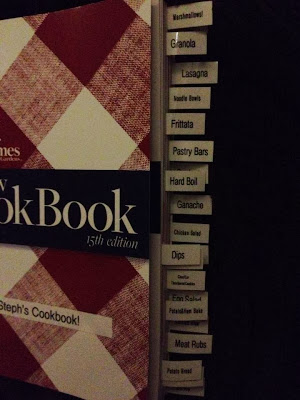 Today I made my first recipe from this book! Granola. It is absolutely fantastic. I only altered the recipe slightly by using olive oil instead of vegetable oil. 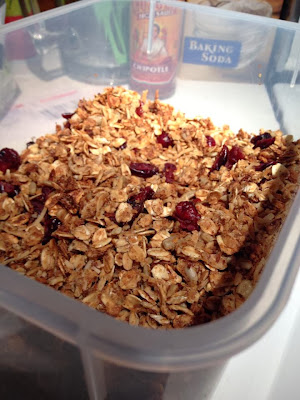 -Ingredients-
-2 cups of oats
-1 cup of nuts like almonds, walnuts or pecans chopped or slivered. (I omitted nuts in mine for the first try)
-1/2 cup flaked coconut (this adds an amazing flavor, I highly recommend it even if you aren't a big fan of coconut, I'm not)
-1/2 cup sunflower seeds (roasted or raw)
-1/4 cup toasted wheat germ (it is usually in the aisle with oatmeal)
-1/4 cup flaxseed meal
-1/2 cup honey, agave, or maple syrup. (I used honey)
-2 tbsp vegetable or olive oil. (I chose olive)
-2 tsp ground cinnamon
-1 cup dried fruit like cranberries, raisins, apricots, or blueberries. (I chose cranberry)

-Directions-
-Preheat the oven to 300 degrees. Grease a pan that has walls to it. 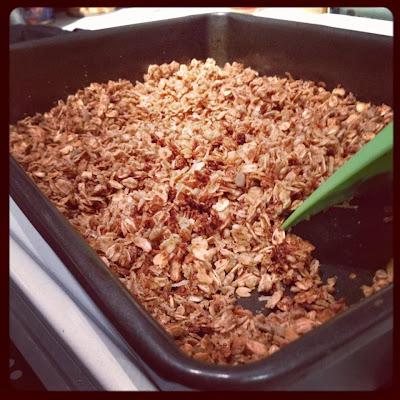 -In a large bowl combine oats, nuts, coconut, sunflower seeds, wheat germ, and flaxseed meal. (Don't add cranberries until after baking).
-In a smaller bowl combine honey, cinnamon and oil until mixed well.
-Fold the honey mixture into the oat mixture.
-Spread the mixture evenly inside the greased pan.
-Bake in the oven for 30 minutes, or until lightly browned.
-Stir the granola after about 15 minutes of baking.
-Remove from the oven and stir in the dried fruit.
-Spread on a piece of foil to cool, or as I did, grab a cup and add soy milk to eat it like a mad woman ;]
-Store in an airtight container at room temp for up to 5 days, or freeze up to 2 months. 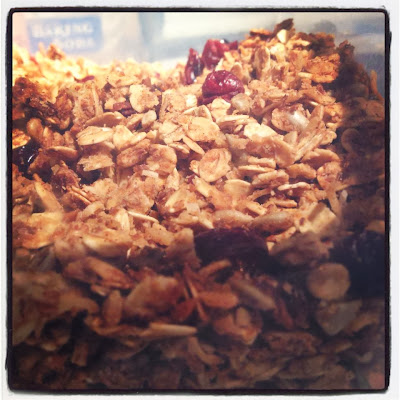 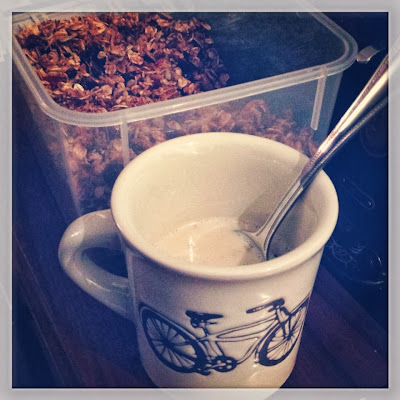 I had to have seconds it was so good... 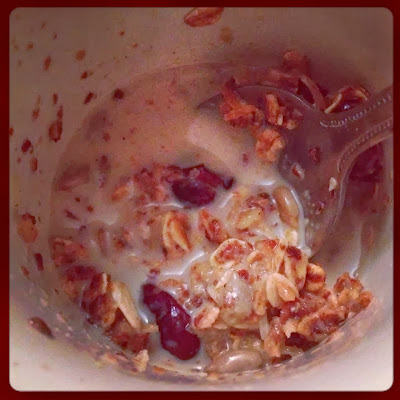 This tasty meal is a mix of all sorts of different ingredients. An Italian dressing is nicely accented with red onions, cheddar cheese and black olives. The quinoa sucks up the flavors for a strong experience :) 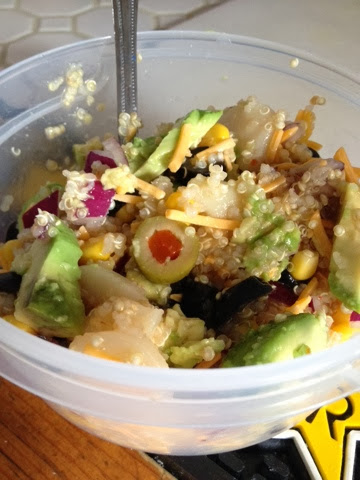 -Ingredients-
-2tbsp fat free Italian dressing
-1/3 cup cooked and cooled quinoa
-a large spoonful of:
-black olives
-cheddar cheese
-chopped red onion
-sliced water chestnuts
-yellow corn
-2 pimento stuffed green olives sliced in half. (Adds a tangy flavor)
-1/4 of an avocado sliced
-Directions-
-throw everything together in a bowl and enjoy!
If you leave it in the fridge for a little bit, the quinoa really absorbs the flavors. I make mine in the morning to bring to work for lunch. :)
Posted by .IronicSteph. at 11:32 AM No comments:

My sister just gave me a simple and outrageously delicious recipe for a coffee protein drink. I'm a barista and this, I would sell in my shop in a heart beat! :) 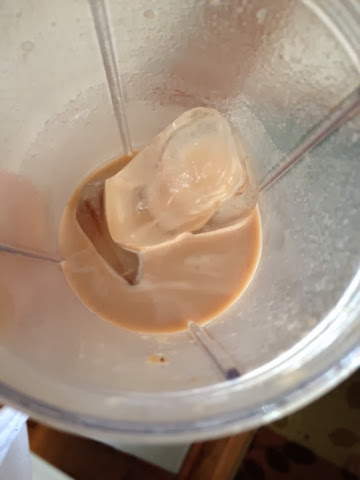 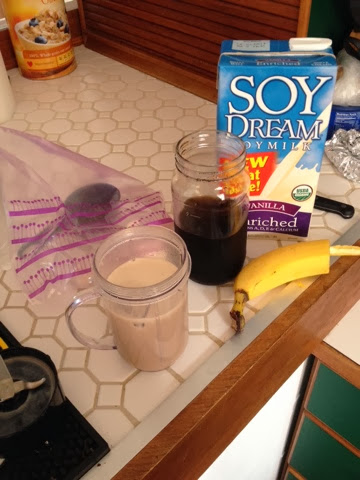 So delicious and healthy :)

Posted by .IronicSteph. at 9:41 AM No comments: 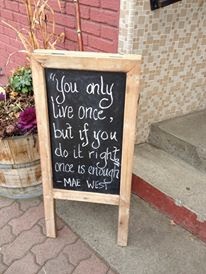 .IronicSteph.
I love baking and cooking, but I love sharing recipes with friends even more. Discovering new meals and treats that become an asset to me is one of my favorite pass times. That and discovering new epic music. So feel free to share my recipes and let me know which ones are your favorite :)

Let me know what you think! 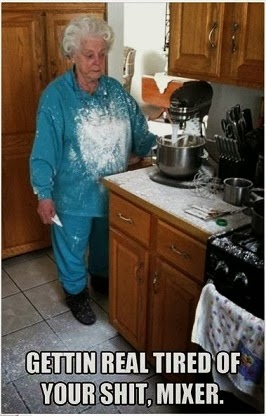